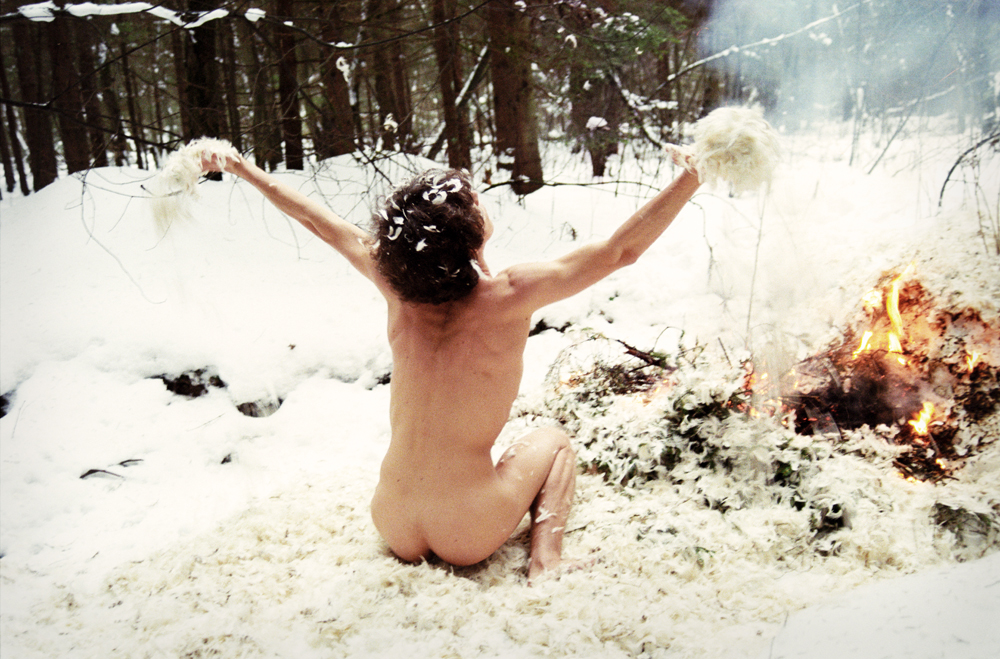 “You’re on a first date, you’ve had a few drinks, you make an excuse to go up to the girl’s apartment. Then, once she leaves the room, you strip down naked, and wait. When she comes back, she laughs. She is so charmed by your confidence and bravado and sleeps with you. Boom.” In the age of #MeToo, this scheme bears uncanny resemblances to the things we recently learned about public figures like Harvey Weinstein or Louis CK. But these are in fact the instructions to “The Naked Man,” a scheme of sexual seduction that is depicted in the homonymous title of Season 4, Episode 9 of US-America’s beloved Sit-Com How I Met Your Mother. The concept is introduced by one of Robin’s dates, a mediocrely attractive man, self-attestedly without qualities (“I’m not smart, funny, or handsome.”), with whom she still chooses to have sex. The gang gets hooked on the scheme since it promises an easily earned sexual experience with high chances of success: “works two out of three times – guaranteed.”

“The Naked Man” became a widely enjoyed and, within the fan community, well-known component as well as reccurring scenario in the show’s following five seasons. It has thus proven effective in two ways: plot-internally, as an element which allows the characters to persuade someone into or achieving something else via having intercourse, rendering sex a valid tool of and for seduction; and externally, as a catchy motif generating attention for the show as one of its signature schemes. Given the wide-spread acceptance, approval even of narrative elements and a sort of humor like this it really makes you wonder why people are shocked by the latest revelations on how women are and have been treated. If uninvitedly presenting one’s genitalia to women is depicted as entertaining and funny, then the assaults connected to #MeToo, Harvey Weinstein, Charlie Rose, or Louis CK should not be shocking at all. After all, they are supposed to make you laugh. It is, in this light, almost derisive that Aristotle understood jokes as “a kind of abuse” which should ideally be told without producing pain. But the sort of humor that is pervasive in contemporary entertainment does so anyhow.

The content and structure of popular narratives are central to how we understand ourselves, what we expect from and how we deal with life. Fictional representation is most effective, most appealing, when it allows for the recipient to identify with structural phenomena of the depicted such as race, class, gender, standpoint, etc. Conversely, by being consumed and proving to be impactful these phenomena are being solidified. In the case at hand, the meta-narrative revolves around five western privileged cis heterosexual white people (WHCW) in their late 20s and early 30s, the prototypical position of economic and social prestige and potential, and the transitional phase within a western rite-of-passage, including its requirement for tropes of struggle with love, money and friendship. The set-up of shows like HIMYM is designed to cater to the desires of an audience that is more or less accurately represented by the protagonists, condoning positions and interests of the “Other”, while synchronously concealing the privileged standpoint and structures it is based on by not just normalizing itself, but in fact constituting the norm. In his 1999 work, How Our Lives Become Stories: Making Selves, Paul John Eakins emphasizes the meaning story-telling has for constituting the self: “narrative plays a central, structuring role in the formation and maintenance of our sense of identity.” Narration and biography therefore are closely connected, and the self “does not necessarily precede its constitution in narrative.” The construction of a stable and meaningful identity is a fiction deriving from fiction.

In the (quite typical) case of HIMYM it revolves around five privileged Caucasian US-Americans. Hanging out with your white friends at a bar in New York City every night; mostly engaging in heterosexual relationships; exposing yourself in a desperate attempt to get into a woman’s pants – all this is presented as the norm. At the same time, this narrative mode of constructing the norm conceals the characters’ privileged social position, taking it as a given and excluding those who don’t fit into the picture. A (self-identified) African-American woman is rather unlikely to adopt the structural position of Ted Mosby. In Western culture, these narratives tend to privilege the privileged.

Lately, as part of the viral discussion of the blockbuster Wonder Woman or the upcoming superhero movie Black Panther, female and/or African American viewers expressed their pleasure about how much better they could identify with a non-male and/or non-Caucasian protagonist. For some, the idea of a female super-hero has been a revelation; some wondered why it took so long for an adaptation like this to hit the screen. Yet, for some this imposed a transgression and violation of traditional gender- and culture-codes. In a world of Western values substantiated within Western ways of story-telling and Western heroes, African-American, Latino, Muslim, Female or narratives of LGBT*-folks remain vastly underrepresented. And in the rare cases these marginalized identities do get depicted, they are subjected to harsh criticism, often times uttered in sexist rhetoric (just think about the mixed reactions to the all-female remake of Ghost Busters). Such narratives emerge from prevailing ideologies, and in their reproduction as entertainment they concurrently stabilize them. These popular modes of story-telling help to proliferate structural violence by suppressing representations of non-WCHW people, solidifying an understanding of social relations as grounded on heteronormativity – heterosexual relations between cis-men and cis-women.

Serving as media of orientation and education in an age of new subjectivities, transcendental homelessness and – generally speaking – uncertainty, the tremendous impact modern narratives have, especially in the form of the novel, can be traced back at least to their origin at around 1800: In the European tradition, Goethe’s Sorrows of Young Werther initiated a wave of suicides among the novel’s readers, whereas for instance the fictional character Emma Bovary’s obsession with novels and romance in the age of prose deals with these tendencies within the storyline of Gustave Flaubert’s novel – a novel dealing with an obsession for novels. As Emma’s case shows, narratives can have a massive impact on our lives, but they can also help us to orient ourselves and to find ways of dealing with the struggles of the everyday. Having been handed down from Roman lyric poet Horace whose formula of “prodessere et delectare,” entertaining and educating, is still held as valid, the novel has in its origins been conceptualized as a medium of edutainment; and the stories contained in it can, just like movies or TV-shows, help people to connect, to exchange values, and to constitute empathy. For the German romanticist Friedrich Schlegel this potential of modern narratives serves as the key element of literature, as he writes in his Dialogue on Poetry (1800): “Poetry befriends and binds with unseverable ties the heart of all those who love it.“

Humor, in this respect, can help forge these bonds, pockets of social connectivity which are generated by conjointly agreeing upon what to laugh about and what not to, what is appropriate and what is not, how to treat other human beings and how not to treat them. For Henri Bergson, the comic is social activity, relying on a human collective. It is hard to laugh alone, one needs an audience which confirms that a situation is indeed comical. As an act of asserting and cementing superiority, laughter tends to devaluate its object or can be seen as an “attentive demolition”, as Roger Scruton puts it. In this way, humor creates a homogenous milieu which draws a line between dominant and inferior social positions. And it is common to impose these imageries via gendered rhetorics of masculinity (dominant) and femininity (inferior). Perpetuating images of subordinate women is a widespread phenomenon in contemporary culture. Often coded in tropes— socio-historically specific, common figurations— of the damsel in distress, the muse, or the sidekick, these popular representations of femininity dominate TV shows, movies, novels and videogames. And as instruments of ridicule in social media and other forms of engagement, rhetorics of feminization and emasculization serve the purpose of stabilizing the cultural hegemony internally and stigmatizing the ‘Other’ externally by deriding them as female or un-manly. Comedian Steven Colbert, but also Congresswoman Maxine Waters engaged in taunting Donald Trump, alluding to the size of the President’s genitalia and thus to his (unmanly) manner of leading the US-nation. Even though these were supposed to be attempts of debunking Mr. Trump’s hazardous and poisonous leadership, Waters’ and Colbert’s comments were based on a structural understanding of the category of gender, imposing a system of two genders which are clearly distinguishable and contrary to each other and thus privileging masculine traits and disavowing those that are understood as female. Humor can become a mechanism of reproducing and/or revealing power structures. If you don’t laugh, you’re not getting it, or worse, you’re not part of the team.

In the episode at hand, “The Naked Man’s” rate of success is proven to be right. The laughs are on Ted’s side when he successfully seduces his date by stripping down naked unexpectedly. Lily adorably manages to ’naked man’ her way out of an argument with her spouse, Marshall. However, Barney’s – the crew’s designated womanizer and suit-o-holic – attempt fails, yet in a ‘hilarious,’ even lovable fashion. When he exposes his genitalia, he gets expelled from his date’s apartment but is being redeemed, for it is him, the guy every woman usually falls for, whose failure proves “The Naked Man” to work accurately in two out of three times. And we all have a laugh.

Sure, in one of the scenarios a female character, Lily, gets to be the seductress. But she is only allowed to do so in an environment wherein she is not running the risk of being accused of “sl*tty” behavior – a privilege reserved for men only. The mere purpose of the scheme for Lily is to settle a dispute, calming down her husband with the use of female sanity and sensitivity – in the sphere of marriage. Female bodies should either be used for the sanctity of the home or in order to stimulate men. The counterpart can be seen in Robin, whom Marshall calls “sl*t” in the beginning of the episode for deciding to sleep with her date, aka the Naked Man (who is being alluded to as superhero-equivalent by Barney as he maintains a life in the shadows of society yet enriches the world with his gift) Later in the episode, Marshall reverses his judgement of Robin being a “sl*t,” cynically substantiating the point since the authority over who is being called what, the sovereignty of signification has been adopted by, and is therefore being executed from the standpoint of the masculine. Asserting dominance only in the realm of the family home or being accused of promiscuity – it is obvious how the creators of the show designed their female characters.

Tropes of subordination, including the redemption of the (usually male) aggressor are deeply embedded in the way (Western) societies, biographies and gender roles are being narrated. Dominating and subordinating, trivializing and ridiculing – humor is not a natural tool of masculine hegemony, but has been appropriated as such. This can be rearticulated, however. And it has been, partially, as shows like “Broad City” or “Girls” cleverly demonstrate. Dismantling an alleged reliability on men, and debunking male conceptions of the self, shows like these demonstrate women’s self-determination over their own humor, their own selves, their own bodies. In proceeding this line of humor, the implicit naturalistic understanding of roles, identities and personhood can be changed, people should not be laughed at for speaking out, and spaces can be created for the victims of sexual assault in which they can articulate their experience – and therein lays the hope for change. “The Naked Man” works in two out of three cases. Maybe, this moment in our history could be the third case. This time, hopefully, with the laughter on the other side.